So you decide to connect two buildings on your property by building a 90-metre-long concourse. It will be built of concrete, the walls will be decorated with native art and it will have nice thick carpets on the floor. How much do you think it would cost…$10,000?…$50,000?…$200,000? If you’re the Provincial Government you’ll pay about $38 million. Yes, that’s THIRTY EIGHT MILLION OF YOUR TAX DOLLARS! That’s exactly what they paid to build the walkway that connects Vancouver’s twin convention centres. Why did it cost as much as 100 Rolls-Royce Corniche Convertibles or 2,750 Hyundai Accents, or the money it would take to raise 150 children to the age of 18? According to Warren Buckley, CEO of the B.C. Pavilion Corp., most of the cost is hidden.

“You’re only seeing half of it – behind the wall with the native art is a second corridor where we have equipment going back and forth.” said Mr Buckley. “To appreciate the steel beams that support it you have to go to the convention centres on either side. After the Games are over, where there’s a plaza above, there’s going to be landscaping, so they need all the beams to support that extra weight.” That’s really spiffy Warren ol’ pal but THIRTY EIGHT MILLION FRICKIN’ DOLLARS??? Are you insane Warren??

Does it only bother me that our incompetent Liberal Government is paying thousands of millions of dollars for our two week party in February while they continue to reduce health, education and other essential services? Another reason why I feel nauseous every time I hear ‘2010 Olympics’.

Older
An Australian Education
Newer
Have a heart 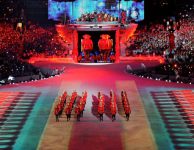