What’s going on in China’s Gobi Desert? There’s been much speculation about the recent Google Map satellite pictures showing strange and mysterious structures, some containing burned out vehicles and planes sitting in the sands of the largest desert in Asia.

Internet sites are abuzz about the reason for the odd installations, who built them and what they do. Although not a top-of-news event (although it appeared briefly on an unnamed local newspaper site but was relegated to bottom billing after pictures of Robert Redford shooting a movie in Vancouver appeared. Who’s interested in Robert fucking Redford anyway? Hey newspaper website…’The Way We Were’ is over. Time to move on). With winter temperature of -40 C and summertime heat up to + 50 C, it’s a strange place to build anything much less sinister military weirdness.

It’s a fascinating glimpse into what could be the start of a whole new cold war between the U.S. and China. Or maybe it’s just more Starbucks locations. You be the judge by viewing the images and video below. Click the image for a larger image. 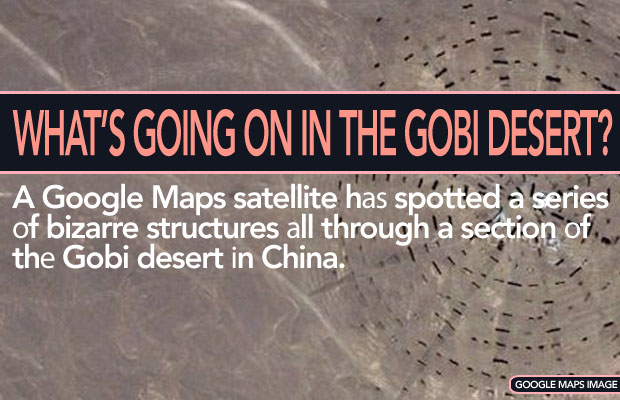