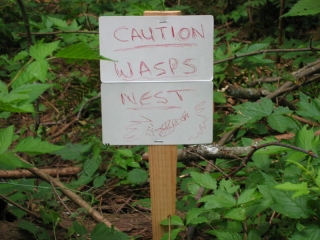 So I tried to be a nice guy and warn people about a small wasp nest in the woods off April Road. Bad idea. I walked by the nest this morning and some a-hole(s) had thrown the warning sign into the brush and tossed wood and rocks at the nest completely destroying it and killing the inhabitants. Attacking a wasp nest is a dumb idea to say the least but it made me regret leaving the sign and giving away the location of their home. I assumed the residents and the wasps could peacefully coexist if we were aware of each others presence and could avoid an altercation. I forgot about the morons that think wasps have no right to build their small nest off the pathway and away from human interference and therefore should be crushed under a log and rocks. Complete stupidity prevails as always but it taught me a lesson. From now on I leave the wasps undetected, undisturbed and without signage. Hopefully the idiots that destroyed the nest will bumble their way acorss the next one completely unaware of its existence until they’re attacked by hundreds of angry wasps. Now THAT would make a great photo for my blog.
Older
Suter Brook Parking Follies
Newer
Life got in the way