Remember vinyl record bootlegs? Those round things with a hole in the middle made from plastic that bad men would produce from audio recorded at rock concerts? Most were crap (an example being all of the Grateful Dead stuff. Not because the recordings were shit but because The Grateful Dead were shit) but some were good and a few were excellent.

An example of excellent would be some of the surviving Queen bootlegs released during their early days produced from recordings taken directly from the audio boards during concerts. I started listening to Queen years before they became famous in Canada, buying the first pink Queen album in 1973 from a small, musty record store in Duncan, B.C. (home of the world’s largest hockey stick). My male friends and I became huge fans of the music and loved their followup album ‘Queen II’, another masterpiece. Their next release ‘Sheer Heart Attack’, a radio friendly release that included their first North American hit ‘Killer Queen’, was also a favourite. The relationship with our rock heroes took a turn after the release of ‘A Night At The Opera’, after which everyone was listening to our personal rock gods, reducing them in our eyes to mere mortals. We were not amused.

A friend from work, who has previously shared some of his fantastic Queen concert photos, let me borrow his beloved Queen bootleg vinyl, which he has kept stored in the deep recesses of his home since purchasing them brand new. I promptly searched Craigslist for a suitable USB turntable to convert them to high quality MP3 files (I no longer own a turntable or even a CD player) and spent an afternoon/evening enjoying a few of their great concerts from the mid to late 70’s and early 80’s.

I’ve included one cut below, recorded at the Hammersmith Odeon, London on December 24th 1975 (contrary to the album cover info), combining a number of their hits into a great medley starting and ending with Bohemian Rhapsody. This track is from the bootleg album ‘Royal Rock Us‘, the cover of which is included below with a number of the other bootlegs in my friend’s collection. Click the play button below and enjoy some great memories from the days when the music was amazing and concerts were a blast.

Stick your headphones on your head, turn it up loud and enjoy… 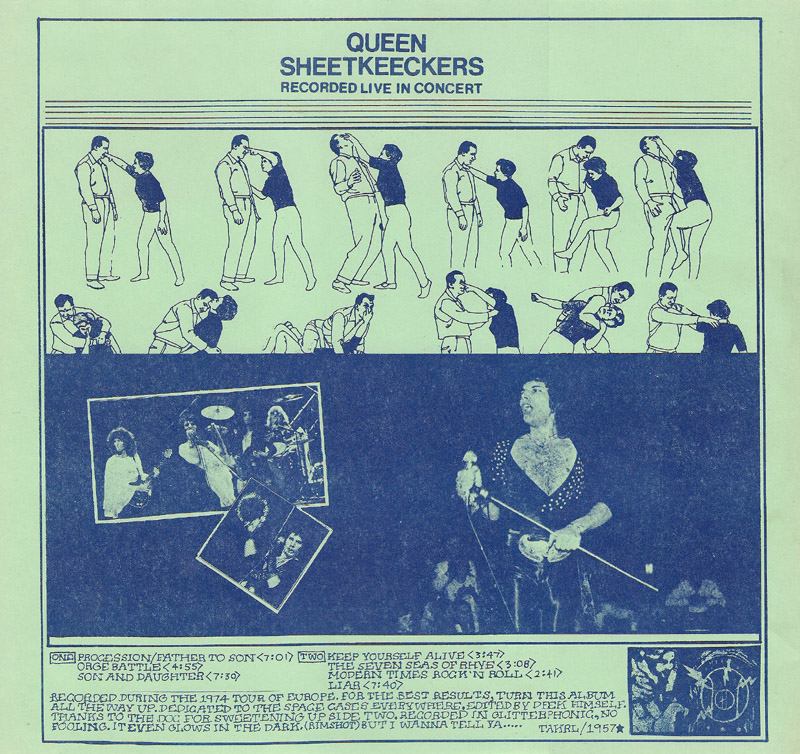